I’ve done hundreds of interviews since I began covering the Menendez Brothers story in the Fall of 1989.

You never forget your first: on March 9, 1990, I appeared via satellite from my home in Miami Beach on Hard Copy 24 hours after Lyle Menedez’s shocking arrest.

My first look for the iconic tabloid TV show was a coat and tie with my longish hair neatly combed – the way I thought a reporter should look on national TV. Having worked in TV news for most of my career at that point, I thought a credible journalist should look…credible.

Six days later — March 15– I had already “gone Hollywood” for my next interview with Hard Copy.

The segment was shot on the Paramount Studios lot in Hollywood under soft pink lighting. (Pro Tip: When appearing on TV, it’s all about the lighting.)

I looked much hipper than the week before in Florida. This time, I was wearing a designer black leather biker jacket, open collar blue oxford shirt, and my hair was 90s style hipster investigative reporter – long but fluffy.

During the Hard Copy interview (below), I played portions of an Erik Menendez audio interview recorded on October 22, 1989.

I met the Menendez Brothers while I was on assignment for Tropic, the late great Sunday magazine (image above) of the Miami Herald (thank you Gene Weingarten and Tom Shroder). I was preparing a biography of Jose Menendez – a rags-to-riches immigrant saga that ended in a terrible tragedy. It was two months after the killing of Jose and Kitty and five months before the brothers were arrested.

Erik and Lyle weren’t suspected publicly and I had no reason to be suspicious.

“I don’t see how you can sit for three and a half hours in a formal interview, spend several more hours with the person who’s done that interview with you if you’ve murdered your parents,” I told Hard Copy correspondent Doug Bruckner. “I don’t believe he is guilty. If he is guilty, he’s the world’s greatest actor.”

It took another seven months before the brothers revealed to their family that they killed their parents after enduring years of abuse.

They wouldn’t go public with their narrative until two weeks before the first trial – a story that most of the public thought was cooked up in a smoke-filled room by desperate lawyers. (Many years later, defense attorney Leslie Abramson told me she wished that Erik had confessed to me instead of Dr. Oziel.)

There were so many interviews during the 1990s. I couldn’t sleep the night before my first time going live on Good Morning America at 4 am PT – live to the East Coast- a few hours before the first trial’s opening statements in July 1993.

My friend Andi Sporkin, a publicist from Philadelphia who later ended up in L.A.,  gave me some smart advice for the five-minute segment:  “Create three talking points and no matter what Diane Sawyer asks you, pivot to one of your talking points. She won’t be listening to your answers because she’ll be focused on looking smart during her questions.” In spite of my nerves and lack of sleep, Andi’s advice made it easy as pie.

During the first trial, I was interviewed frequently by Terry Moran (who along with legendary AP trial correspondent Linda Deutsch) was one of the fairest, most balanced people covering what became a telenovela playing out on live TV for eight hours during court and another three hours at night on Court TV’s highlight show Prime Time Justice.

Thanks to Moran, now an ABC News reporter, I frequently debated Dominick Dunne, always a prosecution cheerleader for Vanity Fair. Nick never met a rumor he didn’t embrace. (PS: Dunne was my inspiration for crossing over from TV to writing when I lived in Miami.) Many Friday evenings, it was Dominick Dunne for the prosecution and me for…The Truth.

The best night was in early November 1993 on the first day that Dr. Oziel’s mistress testified – a woman I shall refer to here as Dr. Oziel’s paramour – stood under a tree ten feet away from us in Hollywood vamp style wearing dark glasses even though the sun has gone down an hour earlier. The paramour and I had a history of sorts.

She had turned me down for an interview for Playboy after appearing in Nick Dunne’s Vanity Fair stories several times.

If you turn a writer down, he or she will do what I did: go find your ex-husband, the S&M club you used to visit, and the Sunset Strip massage parlor where you worked as a receptionist.

Even though my reporting was heavily sourced, she sued Playboy for millions. It’s a good thing Hef liked me. There was a confidential settlement after Playboy spent $800,000 fighting the harassment suit. (Thank you, Christie Hefner.)

Court TV’s Cynthia McFadden asked me if it was true that the paramour had scored a $250,000 settlement. In reality, Playboy gave her peanuts to go away but McFadden was persistent and obnoxious trying to ask me the same thing eight different ways about the end of the lawsuit.

Finally, I blew her off with a flippant answer: “I can confirm that’s not true, Cynthia!” 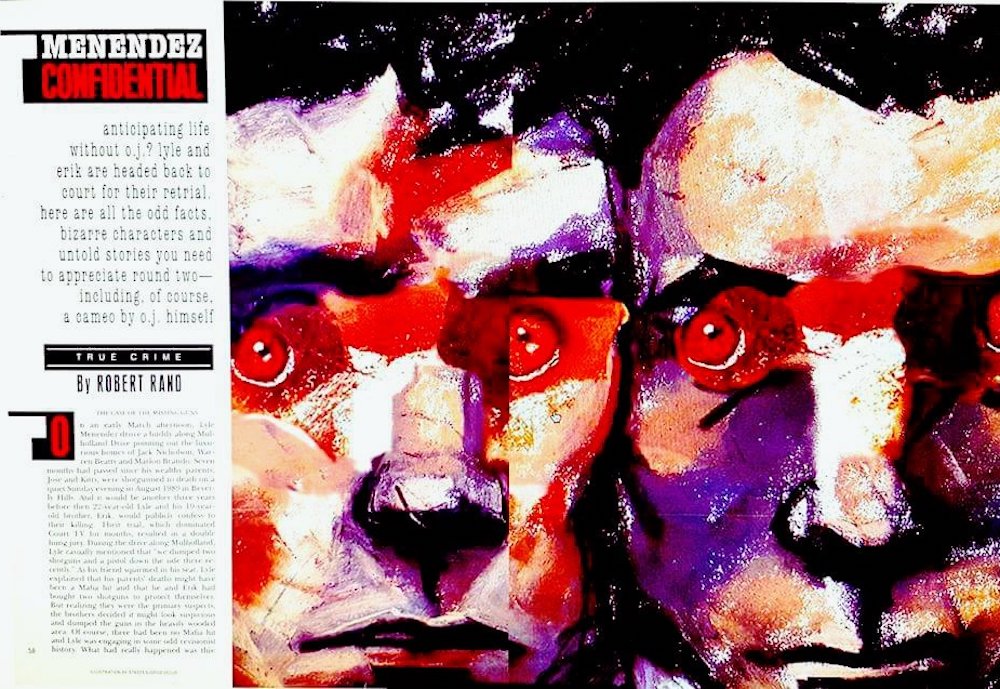 Fast forward to January 2017 when the media spotlight was back on Lyle and Erik Menendez. ABC News produced a two hour documentary for 20/20 – including an interview with me –  which was featured on Nightline.

A few weeks later, HLN aired a two-hour documentary titled How It Really Happened followed by an additional hour where CNN’s Chris Cuomo interviewed Lyle Menendez via telephone from Mule Creek State prison. The special with Lyle’s interview included a studio segment with Cliff Gardner, the brothers’ appeal attorney, Dr. Stuart Hart, one of the defense therapy experts, and me.

In August 2017, I met true crime god Keith Morrison. I’m a Dateline Keith fanboy like the rest of the world. I have the selfie to prove it.

Keith and I went toe to toe in a ballroom at the Millenium Biltmore Hotel in downtown Los Angeles for a little over four hours. The show, titled Unthinkable: The Menendez Murders, aired in November 2017 three days after the season finale of Law & Order True Crime: The Menendez Murders, NBC’s eight-episode scripted series I worked on as a consultant.

My 2018 Menendez book provided the primary source material for the Law & Order program. I spent over a year talking, meeting and sharing portions of my reporting with the Dateline producer. I thought their POV would be sympathetic like the Dick Wolf produced series. After all, we were all NBC family right? Sadly, they signed on to the 31-year-old outdated story of “Team Greedy Rich Kids.”

I’m grateful that the Today show devoted 15 minutes to the Menendez story on September 4, 2018 – the day my book was released. Besides the millions who watched the show live, hundreds of thousands of people have viewed the segment on You Tube. (Thank you, Megyn Kelly).

My most recent TV interview was with Court TV’s Vinnie Politan via Zoom last July – 27 years to the day from when I was pulled into the first trial as a witness. My 1993 testimony was broadcast live on Court TV. Vinnie and I discussed the controversy surrounding Lyle Menendez’s close friend, Donovan Goodreau. Lyle told Goodreau (and his roommate Glenn Stevens) that both he and his brother had been molested four months BEFORE the killing of Jose and Kitty Menendez in August 1989.

Which brings me to an Instagram message and interview request I received in October from Hannah Su, a freshman at Princeton University. I later found out Hannah had gone to PDS – Princeton Day School – where Erik and Lyle Menendez attended before moving to California. Hannah had already written one Menendez article.

She asked if we could talk via Zoom one day. The day before this past Halloween (an ominous anniversary for Menendez scholars), we Zoomed for over three hours.

It was a Friday and Hannah asked some great questions. Her lengthy story titled “Thirty-One Years in the Making: The Story of the Menendez Brothers” was posted in November 2020 on the web site of Nassau Weekly.

It’s really one of the most insightful interviews anybody has conducted with me in 31 years.

Typically, when people do Q & A’s with me, they want to focus on the facts of the investigation and the trials.

Because Hannah and I had a leisurely three-hour discussion, I was able to share some personal stories. The Nassau Weekly article includes information about how I stumbled into covering the Menendez saga after a trip to Las Vegas to report on the home video business.

There’s more in-depth detail than I had space for in my book about the first weekend I met Lyle and Erik at their family’s mansion in Beverly Hills, two months after they killed their parents.

But two months later, days before my biography of Jose Menendez was published on Christmas eve 1989 in the Miami Herald, a series of curious phone calls with the brothers’ aunt and BHPD lead investigator Les Zoeller led to the first media speculation that the brothers had become the primary suspects in the investigation.

Also, I told some backstage stories from the development of the Law & Order True Crime series.

So thanks, Hannah (as well as Keith, Megyn Kelly, Chris Cuomo, Diane Sawyer, Harry Smith, Vinnie Politan, Doug Bruckner, and Dominick Dunne, ) and everybody else who took the time to learn the truth about the Menendez Brothers’ complex family story.