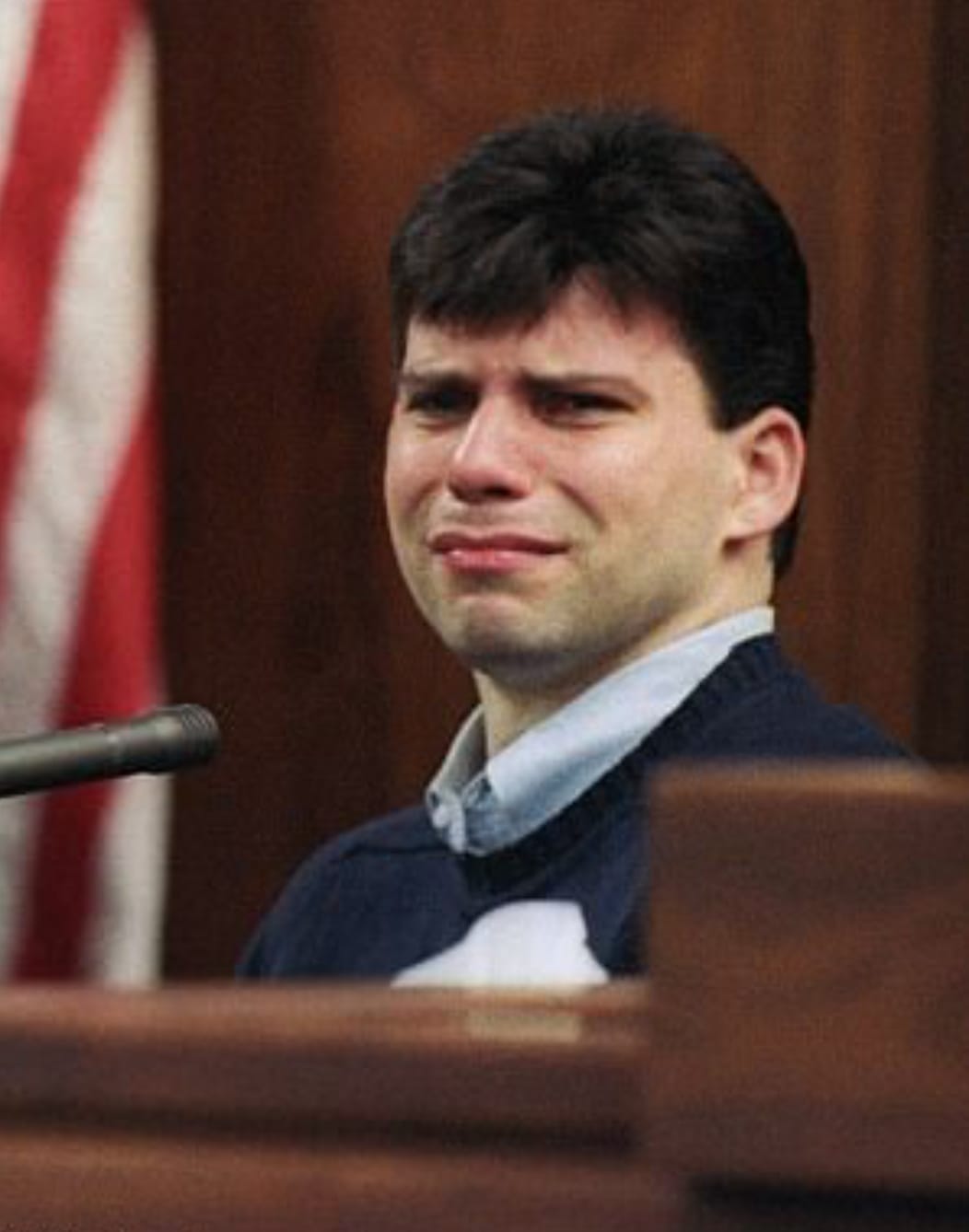 Erik and Lyle Menendez normally spoke with each other while they were being transported to the trial.

But on Friday, September 10, Lyle told me there was “deep silence” on their drive from jail to court.“The defense calls Joseph Lyle Menendez,” announced Jill Lansing at five minutes before two o’clock.

When the brothers entered the packed courtroom, Lyle, dressed in a navy crew-neck sweater, walked directly to Lansing. The testimony began with Lyle’s recollection of “good memories” of his father and his mother. Then Lansing got blunt.

“Did you love your parents?”

“Yes,” he choked out hoarsely.

“Did you kill them for money?”

“Did you kill them to pay them back for all the bad things they did to you?”

“Why did you kill your parents?”

“Because we were afraid.”

When he was growing up, Lyle explained, sports were “everything to my dad, and that was my whole life at the time.”

“And was doing what your father wanted of you important?”

“That’s what made him happy, and that’s what I wanted to do.”

“Why’d you want to make him happy?”

Lyle could barely be heard through his own sobbing.

At six-years old, his daily swimming practices with older kids left him nauseous. He begged his mother not to make him go. She threatened to tell his father. When Jose came to the workouts, he’d hold Lyle underwater to make him build endurance by fighting for air. Young Lyle wasn’t allowed to make friends because that might compromise his competitiveness.

“I was the most important thing in his life, and what I did was serious,” said Lyle. “My brother was unimportant . . . I had to be doing something. I was achieving something, something of importance. And it was very different.”

Kitty resented the time that Jose spent training the brothers. “She would say that I ruined her life,” he said. She complained that Jose had forced her to have children she didn’t want. “Why can’t you be more like your brother?” she yelled at him. If he tried to respond, she’d snap, “Shut up! I don’t want to hear it! You’re stupid. I hate you!”

The courtroom was in a state of emotional shock when the judge called the first recess after about forty-five minutes. In addition to Erik and the family, several jurors and reporters had been crying. As I walked outside, Dominick Dunne asked me to follow him down the hallway so we could talk alone. Dunne looked pale as he told me, “I can’t believe I am going to say this, but I think I believe him.” It was a complete surprise since Dunne had always been a staunch cheerleader for the prosecution in Vanity Fair. Usually, we were on opposite sides of the case—particularly during our debates on Court TV. But at this moment, as personal friends having a private conversation, we both agreed that we had just witnessed some of the most gripping, dramatic moments either of us had ever seen in a courtroom.

After the break, the emotional testimony became even worse.

“Did your dad used to have talks with you about sex between men?” Lansing asked.

Yes, said Lyle. It began as after-sports massages when he was six or seven years old. As the massages became more sexual, he said, Jose compared it to “Greek soldiers having had sex with each other before going into battle so they would have a stronger connection.” His father called it “bonding.” Jose warned him that “bad things would happen to me if I told anybody, and I told him I never would.”

Lyle frequently buried his head in his hands and cried as he divulged a progression of sexual contact: fondling at age six; oral sex on his father at age seven (“He would put me on my knees, and he would guide all my movements”); sodomy with a toothbrush or shaving brush at age eight (“He’d have a tube of Vaseline and just play with me”). By then, Lyle was doing the same to five-year-old Erik in the woods behind their house. From the witness stand, through tears, Lyle looked at his brother and apologized. Erik turned away and sobbed.

Choking on his tears, Lyle recalled the first time his father raped him.

“I just told him that I didn’t want to do this, and that it hurt me. He said he didn’t mean to hurt me, that he loved me.”

“Was that important to you, that he loved you?”

Lansing showed the jurors nude photographs she said that Jose had taken of Lyle and Erik as young children, bending over and showing their genitals. In the framing of the pictures, their heads were cut off. Jose had shown movies of pornographic violence to an audience that included his young sons and neighbors.

Lyle said that he’d complained to his mother: “I told her to tell dad to leave me alone—that he keeps touching me.”

“What did your mom say?”

“She told me to stop it, and that I was exaggerating, and that my dad has to punish me when I do things wrong. She told me that he loved me.”

That evening, an exhausted Lyle told me that “he had already made peace” with his decision to reveal his family’s secrets. “I felt I had finally betrayed my dad,” he said in a call from jail. One member of Lyle’s jury went home and cried for hours.