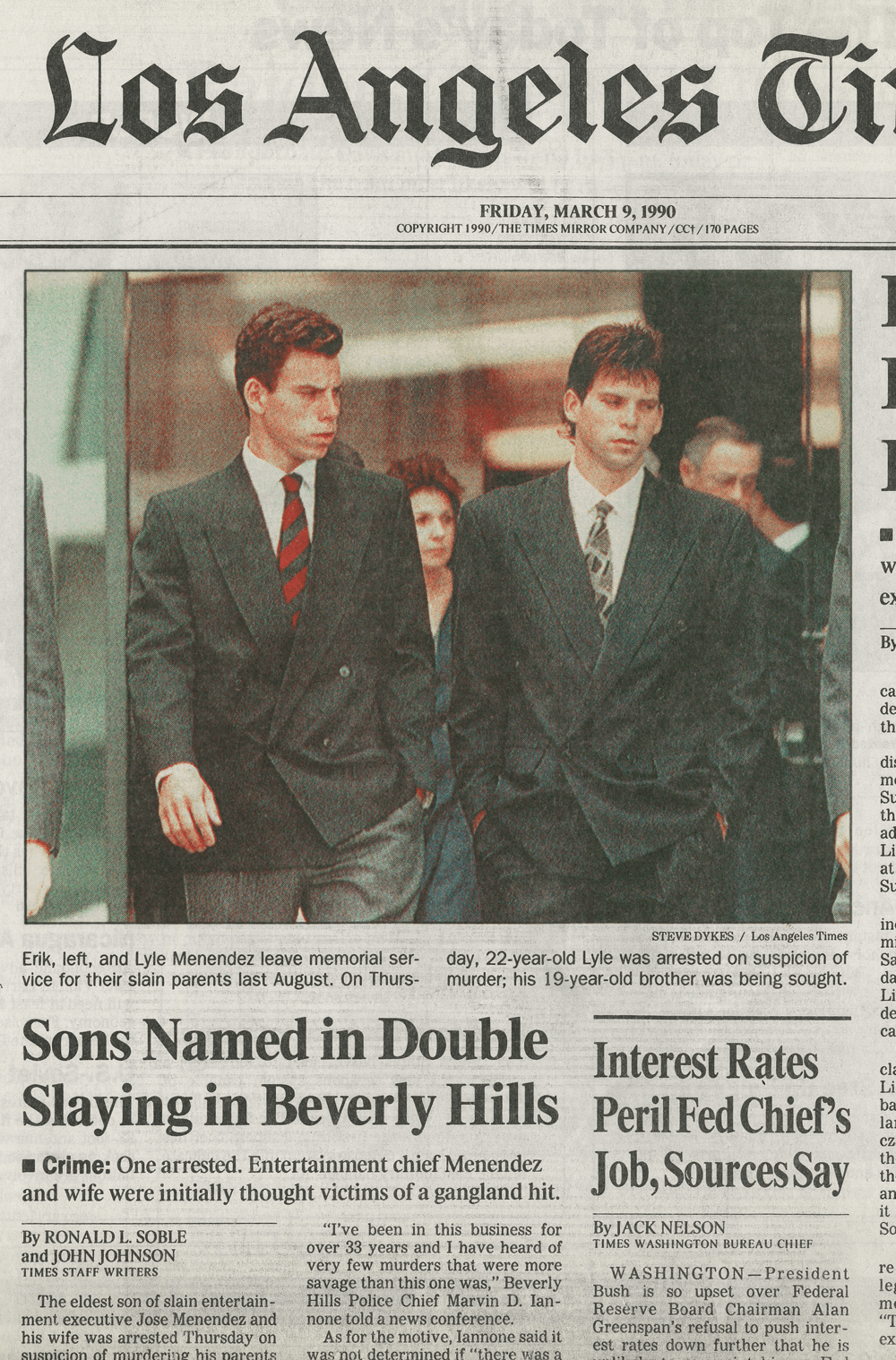 On March 8, 1990, Lyle Menendez was arrested in Beverly Hills and charged with killing his parents.

The Menendez brothers have been in jail for more than half their lives.

Here’s what I wrote about the BHPD press conference a few hours after Lyle’s arrest:

Beverly Hills officials were confident as they bantered with a room full of reporters at a crowded, late-afternoon news conference to announce the arrest of Lyle Menendez. “We have reason to be happy today,” said police chief Marvin Iannone with a broad smile. The political pressure had been equally intense along Rodeo Drive and downtown at the district attorney’s office to make an arrest in the notorious case.

People living in the country’s wealthiest city didn’t like the idea of a couple being blown away in their living room on a Sunday night and the case remaining unsolved. Iannone speculated that greed had prompted the two murders. “The motives, of course, are varied, and there was an estate worth millions of dollars,” he said. “As in any family, there are a lot of conflicts so I don’t know if there was a sole motive or several motives.”

But why, the chief was asked, hadn’t these privileged, apparently pampered young men been able to wait until their parents died? Iannone, a former LAPD commander with thirty-three years of experience, shrugged and replied, ‘Who knows what really goes on within a family?’

Lyle’s arrest was frontpage news from London to Los Angeles. The headline in the next morning’s L.A. Times shouted, “Sons Named in Double Slaying in Beverly Hills : Crime: One arrested. Entertainment chief Menendez and wife were initially thought victims of a gangland hit.”

Later that month, I was one of the contributors to this People magazine cover story. The final published article was much different than the file I had sent to an editor in New York. By that time, the mainstream media had set their agenda: Greedy rich kids kill Ozzie and Harriet.

Over the past two years, both Erik and Lyle have done several TV interviews about the case.

In January 2017, Lyle Menendez spoke with CNN’s Chris Cuomo in a comprehensive 45 minute interview in which he reflected on his troubled family and the night of August 20, 1989.

Twenty-nine years after the arrest of the Menendez brothers, it’s time to review this case.

Their murder conviction was a miscarriage of justice.