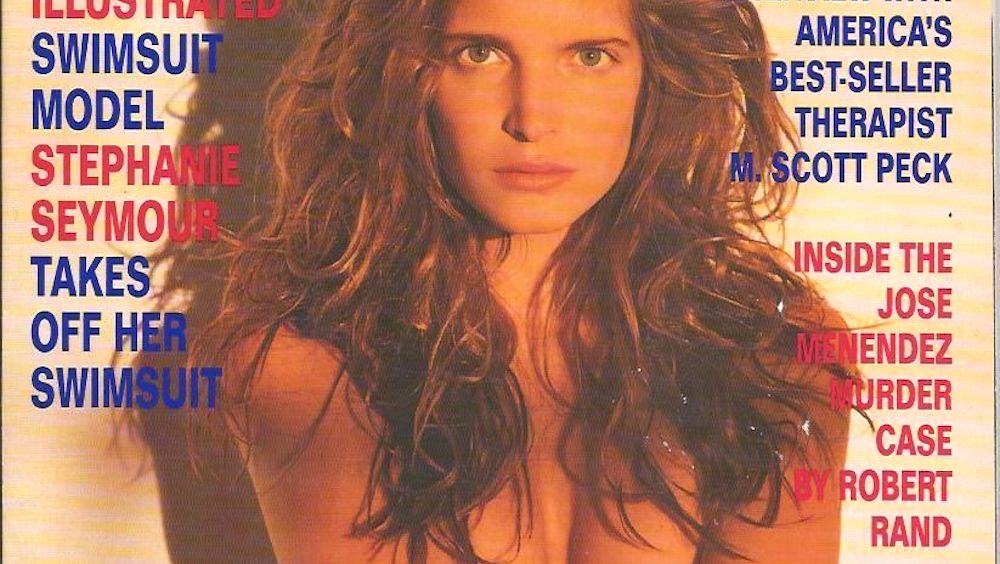 There’s always a story behind the story; that’s something I’ve experienced repeatedly in the 31 years I’ve been covering the Menendez Brothers case.

The original first draft of my book was 250,000 words but my publisher limited me to 100,000 words. I’m sitting on a lot of unpublished material which I hope to share with you one day. I might release an e-book with the uncut, original manuscript. When the brothers are released from jail – I remain very hopeful – I’m already planning a sequel to my Menendez book.

Hugh M. Hefner, the iconic creator and publisher of Playboy, was closely following the Menendez case after the arrest of Lyle and Erik Menendez in March 1990. Hef had assigned three different writers who wrote regularly for Playboy to write a Menendez story. None of them were published because the writers had never covered the case. I was networked to Hef and Playboy through a mutual friend, a Beverly Hills lawyer who was Hugh Hefner’s personal attorney. Tony Glassman was advising me about California criminal law because I was an out-of-towner -- from Miami. After reading my 100-page book proposal in November 1990, Tony asked me if he could confidentially share it with Hef.

A few days later, I received a call from Playboy editor Steve Randall asking me to come in for a meeting. There was good news and bad news: Playboy wanted me to write an article that included some of the scoops from my book proposal. The bad news was that they wanted to rush it in the next issue. My deadline was ten days away. Steve gave me a list of 100 items they wanted to include from my book proposal. I had never worked on such a tight deadline.

Playboy wanted the article to run 6-7000 words. I was already up to 12,000 words when I was only half through the information they wanted. My first draft was 22,000 words – about one fifth of the length of my book.

Playboy began sending my story around the country to the magazine’s various talented editors. The length yo-yoed up and down for several days until Hef’s final decision to let the story run 14,000 words - the longest article Playboy has ever published (about double the typical length of their articles). Thank you Hugh Hefner, Christie Hefner, Steve Randall and everybody else at Playboy who worked so hard to publish the truth about the Menendez Brothers!

[PS. You wil see a series of numbers at the bottom of the first page. That is how you navigate from page to page of the article.]

Dear Lyle,
As you know, to me, the family is the most important thing in my life and I hope it will be in yours. I can’t tell you how much 1 miss not being able to speak to my father. I miss him a lot. I have total trust in both you and Erik and I have no concerns about your future role in your country. Both you and Erik can make a difference. I believe you will!
Love, Dad

ON THE NIGHT of August 20, 1989, the last night in the lives of Jose and Kitty Menendez, their elegant residential street in Beverly Hills was so still you could hear a leaf drop. That in itself was neither unusual nor something to arouse suspicion. People pay a steep price to live in such neighborhoods, and they cherish their peace and quiet.

For some, the price can be reckoned mainly in dollars, and peace and quiet are only words in a mantra chanted by real estate agents in bright-colored blazers. For others, such as Jose and Kitty Menendez, the price has also been spiritual, and the inner turmoil of their lives makes it all the more urgent that the outside be lovely, orderly and calm. So it was in their home at 722 North Elm Drive on that fragrant, fateful summer night. Had anyone happened to stroll past the graceful, Spanish-style mansion around ten in the evening, he might have noticed that most of the lights in the house were out and assumed that the residents were asleep.

Jose and Kitty were still awake, though. In the rear of the house, at the end of a long central hallway with a pretty skylight and a white marble floor, husband and wife sat together in the family room, on a beige sofa, watching videos on a big-screen TV. Jose, 45, was a talented, tough-minded Cuban emigre who had vaulted up the corporate ladder in the United States and made a fortune in Hollywood as an executive in the video business. Kitty, 47, had met her husband in a debating class at Southern Illinois University, where she was a communications major and he had an athletic scholarship. They had two sons, Lyle, 21, and Erik, 18.

It was the maid’s night off and Jose and Kitty were spending a rare evening alone together. Their marriage had some serious problems, but lately, things seemed to be improving. One relative took note when she saw them holding hands at a family get-together. It was something she hadn’t seen them do since their college days.

Jose was dressed casually in shorts and a sweatshirt. Kitty was wearing a jogging outfit. As the television droned in front of them, they snacked on fresh strawberries and cream.

Police believe Jose put his feet up on the coffee table, folded his arms across his belly and dozed.

The house was equipped with an alarm, but Jose rarely turned it on. The boys were always setting it off by accident. Besides, he felt safe in the serenity of Beverly Hills.

It was a warm summer night, and the French doors behind the couch were open to allow the slight breeze. Two people with 12-gauge shotguns quietly walked in through those open doors, put the barrel of a gun to the back of Jose Menendez’ head and pulled the trigger. Kitty, horror-struck, turned to find another gun only inches from her mouth. Instinctively, she raised a hand to protect her face. The blast threw her from the couch onto the floor.

What occurred in that once-welcoming family room was, of course, murder, and a murder that is about to culminate in an extraordinary trial. More than that, however, it was slaughter of a ferocity rarely seen outside of war. The killers chose to stand in place, on a parquet floor suddenly awash in human tissue and blood, pumping shot after shot into the helpless couple. Five blasts hit Jose. In addition to the point-blank shot to the back of his head, he was struck in the chest, right arm, left elbow and left thigh. In the language of the autopsy, his brain had been “predominantly eviscerated” by “explosive decapitation.”

Kitty was all but torn apart by nine shots. One of the large shells full of bird-shot pellets almost severed her wrist; coroner’s investigators believe she raised a hand to defend herself against four shots fired at close range into her face and neck. It is possible—likely, even—that she saw the faces of her killers as she tried to run. Her body was found lying on its right side a few feet from her husband’s, her face an unrecognizable, gelatinous mass.

According to accounts later told to police, Erik and Lyle had been together all evening, first stopping at a movie theater in Century City to see Batman. Around 11 P.M., Lyle made a call from a pay phone and invited a friend to meet them for a beer at The Cheesecake Factory, his favorite Beverly Hills restaurant. The brothers said they drove home to pick up an I.D. card for Erik. After receiving the call, the friend said he waited at the restaurant for 45 minutes, but Erik and Lyle never showed up.

The brothers told police that when they arrived home shortly before midnight, the electric driveway gate was open, the front door unlocked. The first thing they saw inside were gray clouds of smoke still hanging lazily in the air.

“I’ve never seen anything like it and never will see anything like it,” Erik Menendez told me two months after the murders. “They weren’t real—they looked like wax. I’ve never seen my dad helpless. I hope it was sudden. Possibly, if Lyle and I had been there, we could have done something. Maybe my dad would be alive.”

At 11:47 P.M., the Beverly Hills Police Department received a 911 call from Lyle Menendez.

“They shot and killed my parents!” he sobbed.

“Are they still in the house?” asked the dispatcher urgently. “The people who did the shooting?” Instead of responding to the question, Lyle screamed to his brother, “Erik! Get away from them!”

“Who is the person that was shot?” the dispatcher asked.

This time, Lyle answered through heavy sobs, “My mom and my dad!”