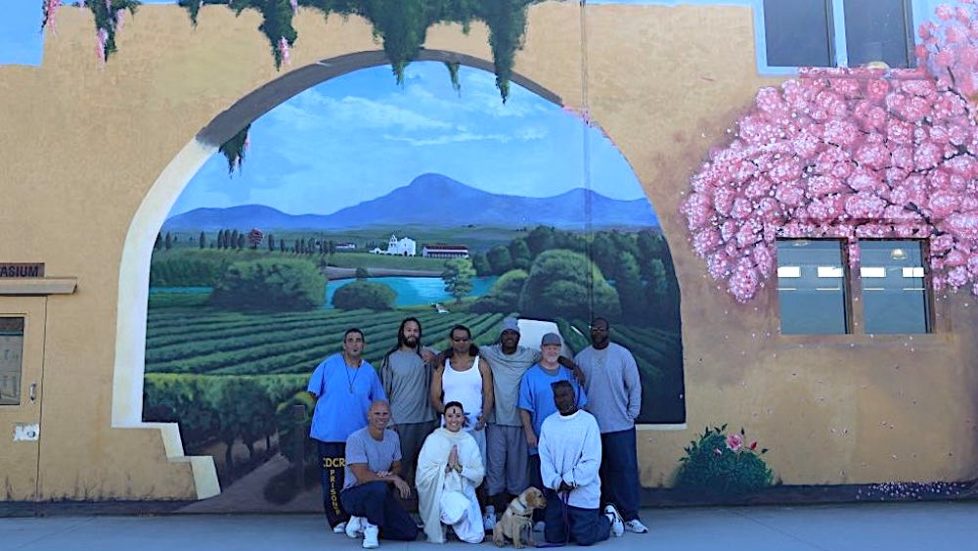 I spoke with Lyle Menendez earlier this month.

He told me that he’s OK but said that the Richard J. Donovan prison where the Menendez brothers are housed is undergoing “a severe quarantine.”

Tammi Menendez has tweeted that she tested positive for Covid but that “Erik hasn’t had any symptoms and he also has been tested.” Normally, both brothers live in separate large cells near each other with five other inmates. During an online chat on Sunday December 27, Erik Menendez said  that he hasn’t seen Lyle since November because he has been “temporarily moved to a different building because of Covid restrictions.” Erik also posted that “masks are mandatory and we have over 50 cases in the building.”

Erik Menendez also announced during the chat that the Menendez brothers are “planning to file a new appeal in 2021” and “I am excited about it.”

The COVID-19 tracking website from the California Department of Corrections and Rehabilitation reports that there are 38,198 active cases in the CDCR prison population of 115,000 - 7371 of them were infected in the last 14 days.

The Correctional Training Facility  currently has California’s largest outbreak: There have been 867 new cases in the past 14 days.

On December 12, the LA Times reported that “Statewide, the number of infected incarcerated persons increased 130% last week, with 3,684 new cases. More than 6,000 of California’s 91,000 inmates had tested positive for the virus as of Friday. In total, more than 26,000 inmates — just over one in every four prisoners — have tested positive, and 97 have died. The CDCR  announced a two-week lockdown of all facilities in late November in an attempt to curtail the virus.”

Both Lyle and Erik Menendez continue to remain healthy.

Lyle tells me that the brothers (and other inmates at Donovan) are wearing masks, social distancing and following other prison protocols to stay safe.

The COVID-19 tracking website from the California Department of Corrections and Rehabilitation reports that there are 2222 active cases in the CDCR prison population of 115,000.

There have now been 52 inmate deaths statewide.

Richard J. Donovan (RJD) is showing two active cases and no deaths. There have been 1048 staff cases in California. Of the 40 staff cases diagnosed at Donovan, 18 people have returned to work. San Quentin has had the largest outbreak in California with 2331 cases, 158 currently active and 24 deaths. The top medical officer for the state prison system was removed from his position following criticism of inmate transfers from CIM to San Quentin that led to a major outbreak at SQ.

The ominous email from the California Department of Corrections and Rehabilitation showed up at 7:46AM on March 12:

As part of CDCR’s COVID-19 prevention efforts, normal visiting will be canceled statewide until further notice. This includes non-contact visits.

It was less than 12 hours since President Trump spoke from the Oval Office, the NBA canceled the season, and Tom Hanks announced that he and his wife were infected in Australia.

That trifecta of terrible news was when most Americans finally understood the reality of the crisis. The next week saw panic buying at grocery stores, schools closing, and the shut down of the U.S. economy.

As usual, Lyle was upbeat and optimistic. Both of the Menendez brothers have accepted that they will never leave California’s prison system. They were sentenced to life without parole following their 1996 first-degree murder conviction for the killing of their parents in August 1989.

Lyle and Erik have contributed to their community at Donovan.

Lyle has organized the creation of a new recreation area that includes a large mural and Erik leads a weekly mindful meditation group. These pics were taken in early February before social distancing began in California. 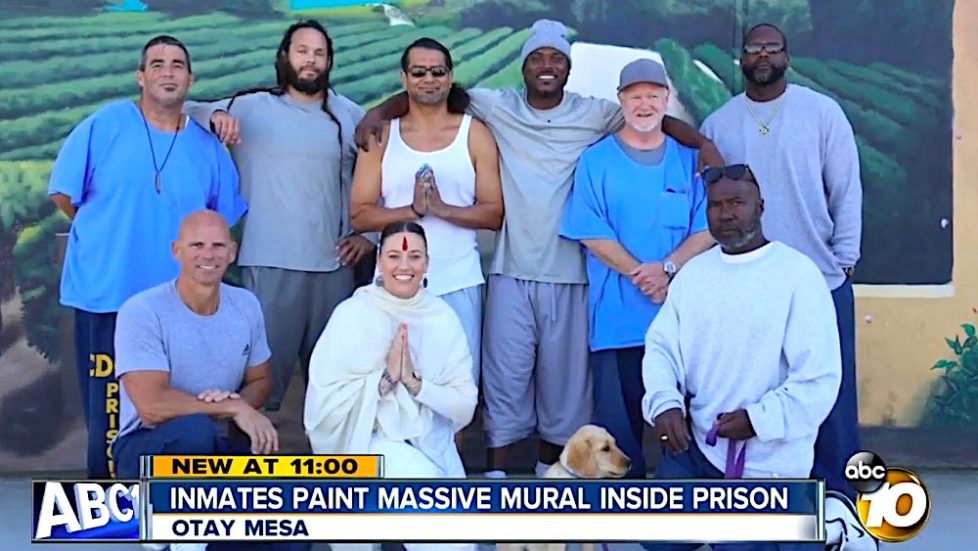 I’ve been concerned for the brothers’ health the past few weeks as I’ve read distressing stories about inmates and guards becoming sick at overcrowded prisons in New York and Texas.

In California, the CDCR is reporting that 27 staff members in California prisons are infected as of April 2 (refresh the the CDCR web site for updated numbers).

The largest outbreak is 11 people working at the California Institution for Men in Chino. Nineteen California inmates have tested positive for COVID-19 but there have been no deaths…yet. (The brothers’ prison goes by the initials RJD in this graph): 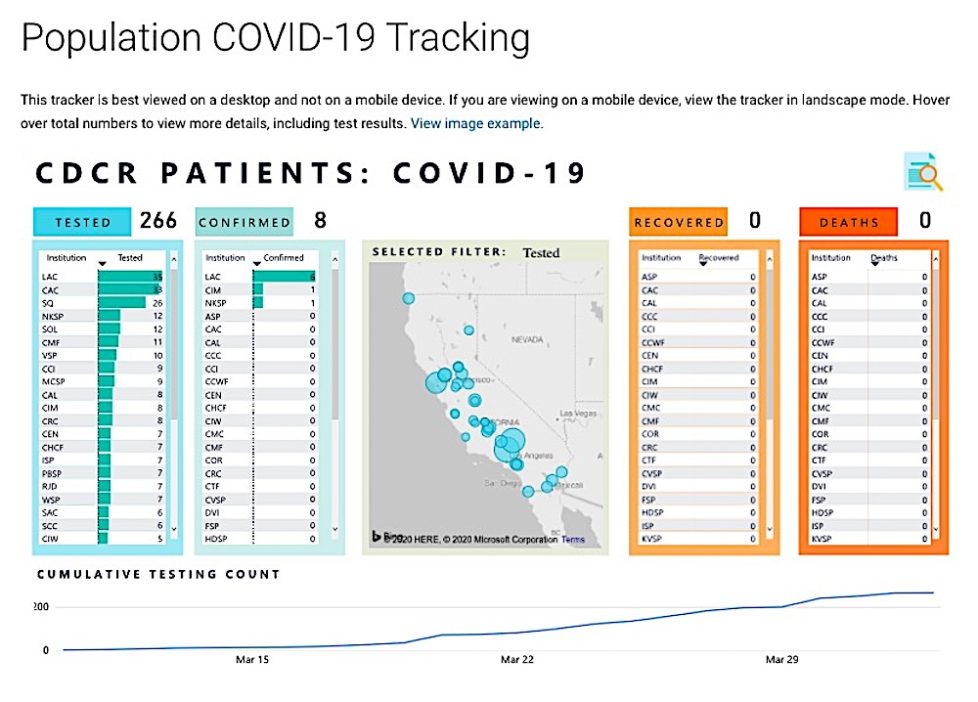 The CDCR has implemented a prisoner safety program to keep the numbers low as possible.

According to the Los Angeles Times, 3500 prisoners are being released early from California’s prisons:

The state has also blocked the transfer of county jail inmates to prison, a decision that state lawyers told a judge will keep 3,000 additional people out of the penal system. And the state intends to move 480 to 530 inmates out of dorms, where prisoners are bunked as close as two feet apart with shared sinks and showers.

In a phone call April 1, Lyle Menendez sounded a bit stuffed up but assured me that he was just getting over a routine cold.

Lyle told me that the prisoners have soap for themselves and access to cleaning supplies.

I was surprised to hear that prisoners are still being served meals in a community dining room. The alternative would be to lock down inmates in their cells 24 hours a day.

As I wrote last May, Lyle and Erik Menendez are housed in the same area of Donovan and see each other daily: They sleep in separate small dorm rooms; each holds six inmates.

Lyle’s cell has two bunk beds. He has one of the two individual beds in a corner.

The prison day begins with breakfast at 6:30AM. Lyle prefers to sleep in a little later. He makes his own food throughout the day with ingredients from packages that can be mailed to him.

The brothers are both “Group A” prisoners and have earned special privileges. Prisoners are allowed recreation and exercise in the morning. Inmates with jobs go to work. Lunch is a sandwich and fruit in a brown bag that can be eaten at any time. Inmates can go outside in the individual prison yards during the afternoon.

Lyle says both he and Erik are doing OK.

Their entire prison community is in a heightened state of awareness, of course, but so far, their day-to-day routine hasn’t changed much – except for the cancellation of all visits. 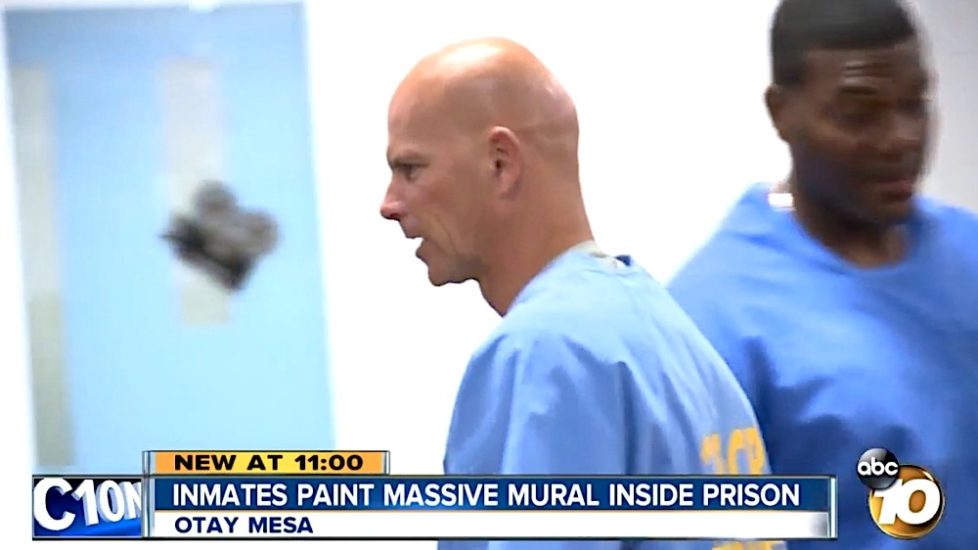