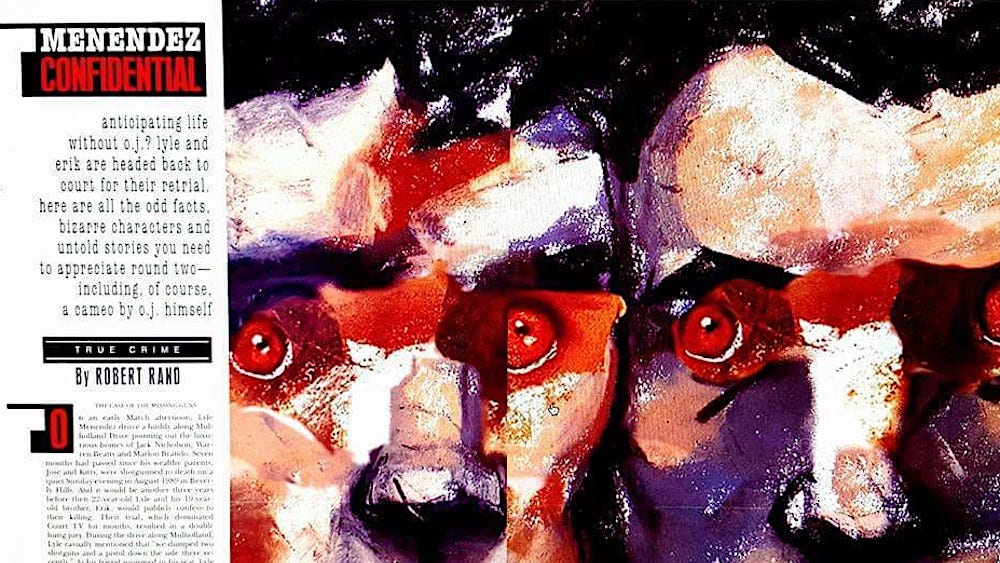 Anticipating life without O.J.?
Lyle and Erik are headed back to court for their retrial. Here are all the odd facts, bizarre characters, and untold stories you need to appreciate round two including, of course, a cameo by OJ. himself.

THE CASE OF THE MISSING GUNS

On an early March afternoon, Lyle Menendez drove a buddy along Mulholland Drive pointing out the luxurious homes of Jack Nicholson, Warren Beatty and Marlon Brando. Seven months had passed since his wealthy parents, Jose and Kitty, were shotgunned to death on a quiet Sunday evening in August 1989 in Beverly Hills. And it would be another three years before then 22-year-old Lyle and his 19-year-old brother, Erik, would publicly confess to their killing.

Their trial, which dominated Court TV for months, resulted in a double hung jury.During the drive along Mulholland, Lyle casually mentioned that “we dumped two shotguns and a pistol down the side there recently.” As his friend squirmed in his seat, Lyle explained that his parents’ deaths might have been a Mafia hit and that he and Erik had bought two shotguns to protect themselves. But realizing they were the primary suspects, the brothers decided it might look suspicious and dumped the guns in the heavily wooded area.

Of course, there had been no Mafia hit and Lyle was engaging in some odd revisionist history what had really happened was this:

The brothers had tossed a pair of freshly fired shotguns down a steep canyon the night they killed their parents. Lyle anxiously returned a few days later hoping to retrieve the weapons, but scavengers had apparently already found them.

Lyle and Erik had chosen a secret spot for a rendezvous. The special place was in Greece, high on a cliff overlooking the Aegean Sea. Lyle told several close friends that they would be able to contact him there if he ever disappeared.

Three months after the Menendez brothers’ arrest, sheriff’s deputies discovered that some links on the two-foot chain Lyle wore to and from court had been partially cut. A strip search turned up nothing, but a search of their cells was more productive. Deputy Robert Birkett reported that he found “an escape contingency plan with information on countries that had extradition plans.”

As if the brothers needed more trouble, Lyle actually titled one document “Key Questions” and wrote down such concerns as “How will they be looking for us? Can we get an appearance change? How do our girlfriends fit in?” Other papers mentioned “safe houses” and listed various entries: “three passports with different names. Need finances. Need silencer. Extradition.”

As it turned out, the plot was merely a paper tiger. It was found that the brothers had no part in cutting the chains. After accusing the Menendezes of attempted escape, the sheriff’s department recanted. The escape plans were never mentioned during the trial.

THE ABUSE EXCUSE IS BORN

Abramson asked Vicary to “get involved—do your thing,” which meant to spend time with the Menendez brothers and form a professional opinion. He already had an opinion based on what he knew from the media. “When I started, I completely accepted the prosecution’s theory of the case,” he recalls. “I thought they were rich kids who were pissed off at their overbearing, oppressive parents. They killed so they could go on with their lives and have the money.” But as a psychiatrist, he knew children rarely kill their parents. And when they do, they often have been victims of terrible abuse.

Vicary had a hunch that the father, Jose Menendez, was going to turn out to be a monster. But he was puzzled by the mother, Kitty. “It’s rare when kids kill their mother. I couldn’t believe Kitty had been doing nasty, rotten things to her own children,” he said. “It shows my own naivete.”

A week after Abramson called, Vicary was face-to-face with Lyle and Erik. The first few minutes were awkward. “There’s no point in beating around the bush,” Abramson said. “We have a tough situation and Dr. Vicary is here to help us. We all know you guys did it. Isn’t that right?” Everybody smiled except Vicary.

His sessions with Erik took place in a tiny interview room down the hall from Erik’s nine-by-seven-foot cell. With the door of the room closed to shut out the constant din of the jail, the temperature in the room felt as if it were 100 degrees. Vicary occasionally took notes as he sat across from Erik, who was chained to a chair.

During the sessions, Erik described Jose as a “mental manipulator.” Kitty “loved us but hated us.” She yelled to her sons that she wished “they’d never been born.” Jose repeatedly told the brothers what he could’ve done “if I had your start.” They “grew to hate him.” At one point, Jose told Lyle and Erik he had “disinherited and disowned them.”

Vicary believes both brothers were emotionally immature, many years behind their peers. “Erik was probably a person about 8 to 12—somewhere in that range. Lyle was a little more advanced, but from an emotional point of view, he was probably in the 12 to 14 age range. Both of them were very immature from a psychological perspective. Both knew how to conduct themselves in a superficial way to avoid sticking out from other people.”

Late one night in his cell, Erik was startled by someone speaking to him. It was his father’s voice. It sounded “like a stone, like the devil” and he told Vicary he would “do anything not to hear it again.” Sometimes the voice would whisper to him in a dream. But on other occasions it would scream, “You’re stupid!” “You’re not worthy of being a Menendez!” or “It’s your fault!” just as his father had in real life.

When it came to patients hearing voices, Vicary found this persuasive. “Real patients tell you it’s like someone is in the room standing next to them talking,” says Vicary. “The people who make it up talk about voices inside their heads.” To Erik, it sounded as if his father were right next to him, an actual presence in his cell.

Erik frequently became emotional, shaking and crying during their meetings. Vicary was surprised during their eleventh session when Erik said being in jail was “relaxing, like a vacation.” There was one other thing he was relieved about: “Now we don’t have to succeed,” he said about his and Lyle’s lives.

EDITOR’S NOTE: THIS IS A MULTI-PAGE ARTICLE. CLICK ON THE NUMBER BUTTONS TO READ THE NEXT PAGE.